Musubi Dojo Aikido Chrzanów was founded in 2003 by Sensei Piotr Burnos. It is the oldest school in the Chrzanów district. In the context of aikido, the term ‘Musubi’ means a connection or relationship between aikido students. Thus our school is open to everyone interested in this Japanese martial art, and connects people through common practice on the mat and meetings outside the dojo.

A little bit of history, but not too much.

In the early days, training sessions took place at the now defunct Primary School at ulica Woynarowska, and since 2004 have been held in Primary School No. 3. The early days were a difficult period for the dojo – this was linked to the need to propagate aikido in the Chrzanów district. Thanks to hard work at the grass-roots level, a large group of students has gathered around Musubi Dojo. In response to the increased interest in training for children, since 2005 the dojo has held special classes for young samurai aged 7 – 12. 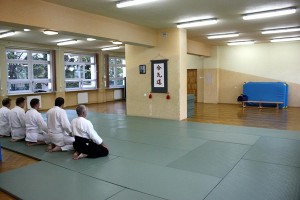 A total of approximately 50 students currently practice in Aikido Chrzanów, and the most experienced of them already have dan ranks. The school maintains close contacts with other dojos such as Kraków Aikikai – Polska, Aikido Schule Rosenheim in Germany and New York Aikikai in the United States. This allows our students to participate in national and international seminars conducted by the best aikido teachers.