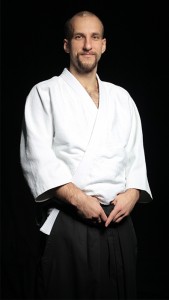 Piotr Burnos– 5th Dan aikido Aikikai, Shidoin. Began training in 1996 in Kraków Aikikai– Polska, under the guidance of his first teacher, Dariusz Zieba 6th dan. After obtaining a black belt, in the years 2000 – 2003 he conducted training in Krakow as an assistant instructor. In the autumn of 2003, he opened his own aikido dojo in Chrzanów.

He has participated innumerous internships and aikido summer camps, e.g.,with Doshu Ueshiba Moriteru, Nabuyoshi Tamura and Seiichi Sugano. Since 2004, he has regularly visited one of the best aikido schools in the world: New York Aikikai led by Yoshimitsu Yamada Sensei, 8th dan shihan, where he has been training as an uchi-deshi. Taking direct guidance from Yamada Sensei, he shares his experiences with others, teaching seminars in Poland as well as abroad in the United States and Germany. He is the secretary of Sansuikai International.

His professional career is centered around academia; he has a PhD in electrical engineering. He is also a long-distance runner in his free time. His motto is:

A good teacher should also be an attentive student. Only then will he see the needs of his pupils.

He began aikido training in 2003 in Chrzanów. Since 2007 he has been an assistant instructor, mainly training children. He participates in seminars and camps (with Y.Yamada, H.Isoyama and Ch.Tissier, amongst others); he has also trained as an uchideshi at the New York Aikikai. In 2011 he founded his own aikido school in Jaworzno.

He began training in 2003 at Musubi Dojo Aikido Chrzanów. In 2010, he received the rank of Shodan from Yamada Sensei. He has participated in many seminars and summer camps with Yamada Sensei and Tamura Sensei in Poland and abroad.

He has practiced aikido since 2006. As he says,” time spent in the dojo is the best time.” Every year he participates in summer camps with Yohimitsu Yamada Sensei in Bernau and numerous training seminars. For several yearshe has been an assistant instructor in Chrzanów.